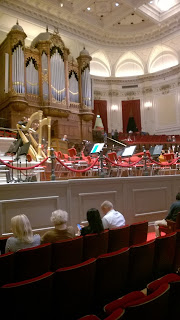 Sunday I attended an afternoon concert at the Concertgebouw. It was without a doubt one of the finest concerts I've ever heard. Not only is the Royal Concertgebouw Orchestra one of the top orchestras in the world but the grand hall has astounding acoustics. I was sitting stage left, quite a bit left, in row 11. The cellos were over on the far right and I felt like I was sitting right in front of them. I've always thought that Orchestra Hall and the Opera House in Detroit have excellent acoustics and I think they do, but the Concertgebouw seems to be on another plane. The soloists were two young pianists who happen to be brothers and Dutch. Arthur and Lucas Jussen, only now in their mid-twenties, have been playing for more than 10 years. I think it's safe to say that they are at the beginning of what will be a stellar career. They played Poulenc's Concerto for Two Pianos and Orchestra. I've heard some very good pianists over the years but no one has played as
Post a Comment
Read more
More posts