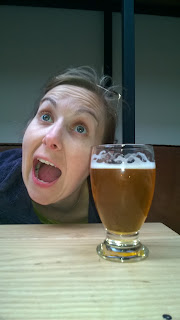 It’s Saturday night and things are hopping at De Zotte , the small cafe around the corner from my Amsterdam home. Not surprisingly, it’s an overwhelmingly young crowd, but not exclusively so. There are few other nearly golden-agers among the customers. They generally seem to be having food with their drink, however. I’m starting off with Jack’s IPA, which tastes more like an American ale than anything else I’ve had since I got to Amsterdam. Very hoppy with quite a kick on the backend. At 7.5 percent, it’s also a bit on the high side for alcohol. May switch to something a little less alcoholic. Amanda went home today. It was great spending the week with her. She was an easy travelling companion because as she said, “I’m pretty much down with everything.” And she was also very easy-going about the various mishaps that occurred through the week, from the aborted canal cruise on Saturday to the unplanned, multi-hour bike cruise through southeastern Amsterdam to getting separated a
Post a Comment
Read more
More posts