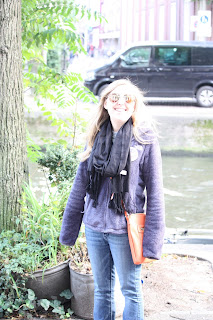 I got Amanda from the airport and after getting her settled, we found some food and spent a little time checking out shops on Elandsstraat in the Jordaan. A bit before 5:00, we meandered over to Cafe Wester where we were to meet our canal tour guide from Those Dam Boat Guys. As promised, Ben was waiting for us at the front door. He checked off our names and as soon as the other 10 passengers arrived, we were off to the boat dock. "Dock" is a rather misleading word, since the boat was tied up along the canal, along with myriad other boats. You certainly wouldn't have mistaken for a boat dock in the Michigan sense of the word.

Our boat was small, with seating for about a dozen passengers. Gingerly, stepping aboard we all settled in, and Cameron, our boat captain, shoved off. He went around to each passenger asking about our stays in Amsterdam thus far, was it our first time, what were we doing here, and so on. It was an eclectic bunch. Three couples, Amanda and me, and one newly graduated electrical engineer taking a gap month between end of studies and new job.

The tour was great. I've been on these sorts of tours before when you have a big boat, covered, and a canned spiel in multiple languages. This was not one of those. Cameron is an Aussie who's been hanging out in Amsterdam off and on for the last 16 years. He's been leading tours for this company and elsewhere. If you couldn't follow Australian-speak, you were out of luck. As it was, he talked very fast. Perhaps overly-caffeinated? Chatting with Ben before, he hinted that Cameron was a bit manic. That may have been an understatement. But he knew his stuff and we hit all the high points on the tour. 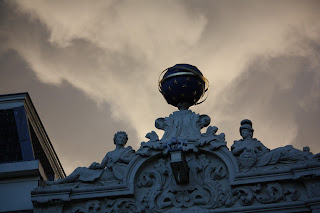 About 80 minutes into what was billed as a 90 minute tour, we had to pull over so that Cameron could remove a plastic bag that had become entangled in the propeller. Right after tha,t the clouds that had been gathering let loose and the rain came down in earnest. So much for weather forecasts. Not only did it rain but it turned into quite a nice little thunderstorm with quite a few bolts of lightening. It was, perhaps, not the best time to be in an open boat on a canal. Then the boat completely stopped responding to any navigation and Cameron pulled over, tied up, and apologized profusely for the shortened cruise. Fortunately is was only about 15 minutes back home. And Cameron gave us an umbrella.

Sunday was more of the same. Amanda and I rented bicycles from Bike City (highly recommend them: quick, friendly service and decent rates. Not the lowest I saw but they're conveniently located for us in the Jordaan) and pedaled up to Westergasfabriek where they have an outdoor market the first Sunday of the month. By the time we got there, it was sprinkling a bit. We ducked into Troost Brewery for beer and lunch. The rain stopped while we were eating and we spent an hour or so looking around the market. Amanda found a ring. I found food to take back to the apartment. That's about how things work most of the time.

By the time we were headed back, the rain was again in serious form, and we were soaked. Clothes back in the dryer. Amanda had a nap. I studied Dutch.

Later, we had dinner at Restaurant Haeje Claes, which advertises a traditional Dutch menu. Amanda had the stamppot while I opted for one of the two not very appealing vegetarian options on the menu. It did have lekker mashed potatoes, which saved it from complete mediocrity. This seems like the place tourists go for their authentic Dutch food. Kind of like when you go to Frankenmuth and have to eat at Zenders.

From there is was time for the Red Light District visit that is mandatory for every Amsterdam visitor. And it was as advertised. Fetching young women lined the street in windows that were outlined in red lights. When the shades were pulled, the businesswoman was busy. The place was packed. Of course, some outrageous percentage of the people on the street were young men. And I don't know that I heard anyone speak Dutch - lots of folks speaking German, English, French, and Arabic. In other words, it's a tourist trap. But when in Amsterdam, you do have to take a look.

And, yes, it rained on us again just as we unlocking our bikes. I was momentarily disoriented by the rain but after remarkably little effort we got back home. Clothes once more into the dryer.

Monday had to be better.