October 01, 2016
I spent the day wandering through the city on foot. I started out by heading north to Station Amsterdam Centraal, more commonly known as Centraal. It's the transportation hub for trains and buses coming and in out of Amsterdam as well as start and end points for many routes within the city. Centraal Station was built near the end of the 19th century and has been controversial from the beginning. Geert Maks says in his book about Amsterdam: "Almost all of Amsterdam's own experts and others involved thought this to be a catastrophic plan, 'the most disgusting possible attack on the beauty and glory of the capital'. Nevertheless, the building of the Central Station in front of the open harbour was forced through by the railway department of the Ministry of Transport in The Hague, and the Home Secretary, Thorbecke. Finally, the plan made its way through the Amsterdam municipal council by a narrow majority."*

Coming at it on foot from the south as I did, you'd really not know that there was a large body of water behind the building. After only a very brief wrong turn, I found my way through the station and came out the north side looking at Amsterdam Noord across the IJ. I took the free ferry across and had a walk about through the borough. It's not a place frequented so much by tourists, although Russell Shorto, in a recent New York Times article says that this is changing. You'd never know it by me. Shortly after exiting the ferry, I was in a working class neighborhood that showed no signs of any tourism.

I experienced some mild anxiety about getting lost. After catching the feeling, I wondered what was driving that. I had nowhere to go. My only commitment was meeting Amanda's plane at 11:30 the next morning. No one was waiting on me to come back to the apartment. If I stayed in Amsterdam Noord all night no one would take notice. So I relaxed and followed the streets around. I had a delightful stroll through a Friday market where you could buy everything from fresh fish and chicken to vegetables of all types to small electronics. Need a bluetooth speaker to go with dinner tonight? They had you covered.

While taking a break from the unrelenting ordinariness of the place, I noticed a small panel, delivery-type truck with the logo for a place called "Oedipus Brewing Company" painted on. Always on the alert for a good local brewery, I discovered that the brewery was only a kilometer or so from where I sat. With remarkably few wrong turns, I found it in a commercial, industrial park dominating by a huge Dirk Van Den Broek discount grocery store. Think Sam's Club without the tires. Or maybe Dirk does have tires. I didn't go all the way in to find out for sure.

Unfortunately, OBC was about 75 minutes from opening and even with no pressing appointments, I didn't feel like waiting around. And Dirk's didn't look like a promising place to while away an hour plus. I decided to head to the IJ and catch the ferry back. There is still time for a return trip. I am quite curious about that name, too.

After much more wandering, I was about to head for home and supper, when I spied a place called De Twee Zwaantjes (The Two Swans). Since I have DeZwaans who are distant relatives, how could I pass up a happy hour beer here? 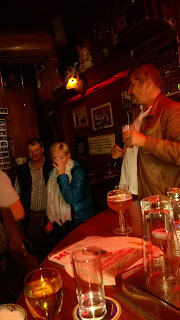 After my Belgian Blonde was set down in front of me, I was just having my first sips when the place was invaded by a throng of boisterous Belgians who were taking a break from a canal tour. The leader threaded his way 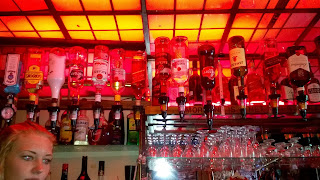 through the crowd, turned on an amplifier cum karaoke machine, and started to sing Dutch folk songs that everyone in the crowd. Next thing I know, I'm in the middle of an afternoon sing-along with a Dutch Mitch Miller. It was impossible not to sing along, even though I knew about two words.No one seemed to notice anything amiss. For the next 20 or 30 minutes there was much singing and joviality. During one polka, the bartender, a short, dark-haired woman with round ruddy cheeks and bright red lipstick used two drink stirrers to keep the beat of the song on the partially filled liquor bottles hanging upside down behind the bar. There was much clapping and cheering.

I didn't see the signal but just as quickly as they had appeared the crowd dissolved back to the Amsterdam street. The man next to me at the bar gave me that story about who they were and where they came from. This must be a regular stop as everyone on the boat got discount drinks to put down as fast as they could.

Who knew two swans could be so much fun?

*If you're looking for warts and all view of Amsterdam's history and possible future, Maks's book is worth a read. His is not quite the same positive view that Russell Shorto posits in his Amsterdam book, Amsterdam: A History of the World's Most Liberal City. I think they work well together, although for readability, I'd give the edge to Shorto. However, that may be due in part to the fact that Maks wrote in Dutch and had to be translated.