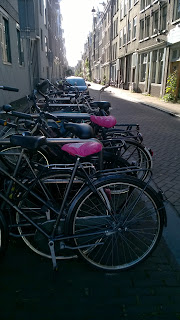 After a very soggy weekend, the week started off with pleasant autumn weather.

As I look back my time in Amsterdam, I'm sure that Monday morning's trip to the Anne Frank house will be one of the highlights. It's an incredibly moving experience to walk through the Secret Annex, as Anne called it, and see the cramped living space where Anne, her family and four others stayed in hiding for more than two years. Almost immediately upon entering, the house exerts an emotional impact. The sense that this is hallowed ground is palpable. Although so much of it is about Anne Frank and her companions, I kept thinking about the others who went into hiding during the Nazi occupation and wondered about their stories, too. We are fortunate to have the diary and other writing that Anne left behind. They signify not only the physical and emotional development of a young girl and the promise of a hugely talented writer, but also the humanity that couldn't be denied even in those dire days.

I also thought the passages in her diary, which I finished reading just before leaving last week, where she talks about feeling so lucky to be in the hiding place while so many others were rounded up and sent to concentration and work camps. Seeing this space made those comments all the more poignant and luminous.

Later that day, Amanda and I were off on our bicycles for some exploring. First we had lunch in a 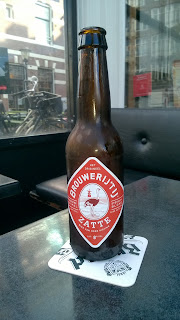 little cafe on Overtoom straat. There were two older local men nursing their beers and chatting while we ate and enjoyed a couple of beers. After we had eaten and were finishing our beers, one of them asked where we came from. Joy of joys, here was an Amsterdammer who didn't speak fluent English. So I started practicing my Dutch. I told him my last name, giving it the Dutch pronunciation, and he sort of sat back and said something like "Ohhh, Dijkhuis." He pointed his cigarette at his companion and told him our last name. We told him how long we'd be in Amsterdam, me stumbling through my limited Dutch and him getting it. I told him I was heading up to Groningen on Monday to find my great-great-great-grandfather's grave. That took some doing. And I surely didn't get all that right. He asked whether I still had relatives in the area up there. In that I had to resort to English but with the help of the waiter who did speak good English, it all got sorted out. It seems that to find someone who doesn't speak English as if it was their first language, you have find someone older.

After that, we rode through Vondelpark and Rembrandt park. They were both full of people out enjoying the sun and mild temperatures.

We headed out of Rembrandt park, back past Vondelpark and proceeded to get thoroughly lost. Execpt that we didn't know we were lost until we realized we had been cycling for a couple hours and had no idea how to get back to our neighborhood. This is one of those times, I was grateful for digital technology, specifically Amanda's GPS. I think I'd have eventually gotten us back since I had general notion of the direction to head but the GPS made it much quicker.

I think getting lost is a great treat when traveling. We had not intended on being on bikes for nearly four hours yesterday. But we got to see a part of the city that we wouldn't have seen otherwise and got to ride along the Amstel River, which was a little different experience than along the canals in the city center. Of course, when you're tired and want to just get home, GPS is nice, too.

After a bit of rest, Amanda and I headed out to Cafe De Jordaan for a biertje or two. We were seated in two seats just off the sidewalk and the other side of the table was occupied by two women. Amanda and I chatted about this and that for a bit then she took off on a Trump tirade. These outbursts arisen more or less continuously since she arrived. When she paused for breath, one of the women leaned over and asked about our plans in case he won. This seems to be common question among people who can't believe that the race is actually still in doubt. That led to much more conversation. Turns out they're from Bloomington, Illinois and were in Amsterdam for a few days before joining  parents for a Viking river cruise in France. This is another great thing about travel: the unscripted moments when you find other people with whom you share a connection.