September 29, 2016
After the pre-flight Tuesday frenzy and jet lagged Wednesday, today started to feel like a real vacation day. I was asleep by 9:30 last night. That last beer at De zotte, a very nice bar with a great selection of Belgian beers, the bar around the corner really did me in. By the time, I got back it was all I could do to brush my teeth and pull the covers back before falling asleep. Except for a brief wake-up around 2:00, I slept through until nearly 10:00. That would be nearly 12 hours of sleep. Wow. But it started me feeling human again. After a shower, coffee, and breakfast, it was about time to start the day.

First order of business was getting stocked up on essentials: coffee, cheese, chocolate, beer, and wine. I also picked up some other stuff like shampoo, pasta, tomato sauce, and fresh fruit. Just in case I needed to fill in any gaps of beer, wine, and chocolate.

Fortunately I made it to the nearby Albert Heijn and back before the rain started. Albert Heijn is a miniature Kroger, but with Dutch labels. It was a blast reading the tomato cans and pancake mixes. I forgot to get maple syrup the first time so went back later. I may have missed it but after about 20 minutes of looking, I gave up, wondering whether what it is that the Dutch top their pancakes with.If you have a clue, let me know.

While perusing the Lonely Planet guide to Amsterdam, I found a description of a local coffee roaster, Lot 61 and decided that no vacation was complete without a bag of very high-quality coffee. It was my good fortune that I had inexplicably forgotten to get coffee at the Albert Heijn. I knew generally where I was heading since it was in the neighborhood that I tripped through the day before. But it was seriously raining when I set out. There were a few umbrellas hidden in one of the cupboards and one of them seemed like it might even hold up on a walk. Making only two wrong turns, one of which was a dead-end at a canal, I slopped through puddles that might have been big enough to put a canal boat into. Apparently we are at the beginning of Amsterdam monsoon season. I don't recall reading that in the Lonely Planet. However, driving rain, soaked shoes, very damp pants, and inside out umbrellas are not reasons to give up a Coffee Quest. I'll let you know how good the coffee is after my first cup tomorrow morning. I suspect at some point, I'll get back there for a cup on site. In the late afternoon, I wasn't about to risk caffeine induced insomnia tonight. 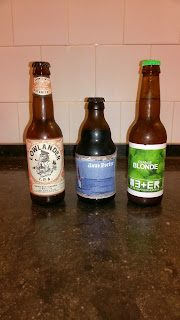 In one of those serendipitous things that happens in new places, I found a nice little wine shop with a highly recommended Merlot from the friendly proprietor and a great little shop with shelf after shelf of Dutch craft beers. I got three bottles of various sorts.

That should get me to the weekend.

Last note: Apparently Amsterdammers are expected to bring their own bags because I didn't get one after buying the coffee, the wine, or the beer. And it was obvious I had my hands full. Rising to the occasion, I managed to stuff the coffee & one bottle of beer into my jacket pockets. So I only had a bottle of wine, two bottles of beer, and an umbrella to hang onto. I think that a new way to spot Amerians in Amsterdam is to see that they're ones with hands full of foodstuffs and no bag to hold them.

And to prove that Amsterdammers also take their beer seriously, I passed a young woman riding her bike with a determined and focused look on her face and a case of Heineken balanced on the handlebars. She had one hand on the beer and one hand steering. It's probably not as challenging as it sounds since bikes pretty much get the right of way everywhere. Cars stop for them and pedestrians better get the hell off the path.